The psiblade is first and foremost a toe-to-toe fighter. Using metamorphosis to assume a form with large reach and a high strength score, the psiblade can simply beat through an opponent’s defenses. Finishing his career with access to 9th-level powers ensures that he retains some versatility. END_OF_DOCUMENT_TOKEN_TO_BE_REPLACED 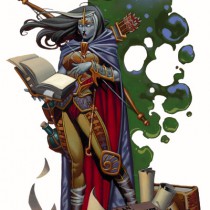