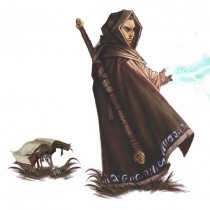 Although small in size, the bronze dragon blood in his veins give him great fortitude. END_OF_DOCUMENT_TOKEN_TO_BE_REPLACED

This small individual uses his connection to nature to aid himself both in and out of battle. Able to assume a number of different forms for use both in and out of combat, he takes full advantage of his abilities to be stealthy, deadly, and ready for any situation. His magical daggers serve as potent weapons both in any form. END_OF_DOCUMENT_TOKEN_TO_BE_REPLACED

Butterfingers is a halfling alchemist with a bad habit of dropping his potions all over other people. The ultimate goal of this character is to emulate a Final Fantasy Tactics chemist, but with Gatling gun speed. Spellvials allow him to create on-contact spell effects, rather than forcing his allies to spend previous actions to drink potions. Combined with multiple throws a round, this makes Butterfingers a formidable (de)buffer in combat. END_OF_DOCUMENT_TOKEN_TO_BE_REPLACED