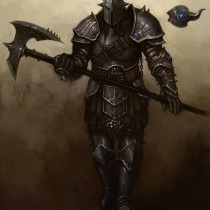 Butterfingers is a halfling alchemist with a bad habit of dropping his potions all over other people. The ultimate goal of this character is to emulate a Final Fantasy Tactics chemist, but with Gatling gun speed. Spellvials allow him to create on-contact spell effects, rather than forcing his allies to spend previous actions to drink potions. Combined with multiple throws a round, this makes Butterfingers a formidable (de)buffer in combat. END_OF_DOCUMENT_TOKEN_TO_BE_REPLACED