Butterfingers is a halfling alchemist with a bad habit of dropping his potions all over other people. The ultimate goal of this character is to emulate a Final Fantasy Tactics chemist, but with Gatling gun speed. Spellvials allow him to create on-contact spell effects, rather than forcing his allies to spend previous actions to drink potions. Combined with multiple throws a round, this makes Butterfingers a formidable (de)buffer in combat. END_OF_DOCUMENT_TOKEN_TO_BE_REPLACED

This planetouched has ancestry from Mechanus and aims to put his natural talents to good use. As an artificer, he is capable of providing items normally unattainable for an E6 party. Survival is achieved by pitting his Iron Defender on the front line, while he stays in back with an array of wands. If he sustains damage, it is quickly repaired with a jolt of electricity. END_OF_DOCUMENT_TOKEN_TO_BE_REPLACED 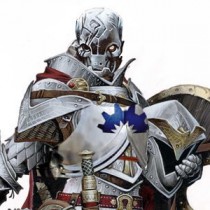 An adamantine citadel of virtue, this nameless warforged seeks out combat with the darkest of evils. Although a formidable initiator, his abilities are considerably augmented by a portfolio of spells and infusions. Artificer infusions allow him strategic preparations, while he maintains paladin spells for tactical flexibility. END_OF_DOCUMENT_TOKEN_TO_BE_REPLACED

Proof that those interested in blasting shouldn’t be looking at the mage classes. END_OF_DOCUMENT_TOKEN_TO_BE_REPLACED