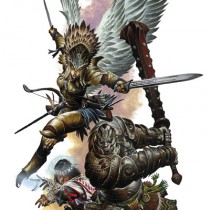 When creating a gestalt character, it is tempting to view the dual class progression as an opportunity to achieve greater breadth. However, gestalt is utilized most effectively when each side of the progression provides synergy. As a simple example, adding gestalt monk levels to a melee-focused druid doesn’t really broaden what the character is capable of. Instead, it makes the character that much better at doing his job. Similarly, I often see parties of characters built to their own ends with no sense of party synergy. These are my thoughts on what a well built gestalt party would look like. END_OF_DOCUMENT_TOKEN_TO_BE_REPLACED